Who are political prisoners and prisoners of war?

They are brothers and sisters, men and women who, as a consequence of their political work and/or organizational affiliations were given criminal charges, arrested or captured, tried in criminal courts and sent to prison.

Alvaro addressing a protest in support of Ricardo Adalpe Guerra, early 1990s. Alvaro was a national organizer in Adalpe’s campaign. 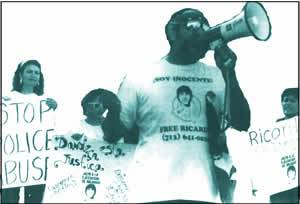 While trying them as criminals, the government maintained files on them referencing their political activities, designed to insure they remain in prison. These are women and men who, while on the streets, made a conscious decision to organize for our freedom and liberation. Then, after making this decision, joined or became affiliated with organizations, parties, etc. that advocated and organized for these aims. Then, as a consequence of their work on the streets, and/or involvement in military actions, they were targeted, captured or framed and tried in criminal courts and sentenced to prison.

While we recognize that there are many people who have become political after their incarceration, George Jackson (murdered in San Quentin) and Ruchell Magee (Angela Davis’ co-defendant) for example, we believe that this campaign has to focus on those political prisoners and prisoners of war whose incarceration was political from inception. We can no longer continue to be liberal in our approach to our struggle. We must do what is demanded of us to move our struggle forward, strengthen our movement, internationalize our struggle and gain freedom and independence.

While we continue to dither around these issues, we can be of no real help for those people inside the prisons and outside who have become political as a result of our work and struggle for freedom and liberation. We are pushing for the admission on the part of the United States government that our political prisoners and prisoners of war do exist inside the prison of the United States, we are pushing for recognition in the international arena and therefore changing how the world views our liberation struggles inside the belly of the beast. We can wait no longer, the time is now.

From The Jericho Movement, which recognizes Alvaro as a political prisoner.