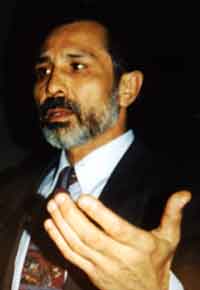 See below for details on how to support Xinachtli’s parole campaign. Letters are due by MARCH 20, 2021.

Xinachtli (Nahuatl, meaning “seed”) is an anarchist communist community organizer and Chicano movement revolutionary, currently imprisoned in Texas. Formerly known as Alvaro Luna Hernandez, he worked diligently in the barrio on civil and human rights issues, known widely for his legal skills. Gaining international recognition as the national coordinator of the Ricardo Aldape Guerra Defense Committee, Xinachtli was instrumental in helping to free Mexican national Aldape Guerra from Texas’ death row, where he had been framed for the murder of a police officer.

In July 1996 Xinachtli was arrested after disarming a County Sheriff who was attempting to shoot him. After defending himself at trial, Xinachtli was sentenced to 50 years in prison for aggravated assault, a charge he vehemently denies. While imprisoned, Xinachtli continues to write frequently, has helped to organize multiple prison strikes, and has been held in solitary confinement for the last 19 years and counting. Xinachtli is a prolific jailhouse lawyer, as referenced by Mumia Abu Jamal in his book Jailhouse Lawyers: Prisoners Defending Prisoners v the USA. Xinachtli assists many prisoners in seeking new trials, and filing suits against the repressive, inhumane Texas prison system.

Texas prisons are now one of the nation’s COVID-19 virus’ ‘hotspots,’ and the courts are refusing to intervene, while prisoner dead bodies pile up in local morgues. Xinachtli is an elderly person, with his life in danger. Presently, Xinachtli is preparing for his first ever upcoming Parole Review Hearing, on July 18, 2021, and so the Xinachtli Defense Committee is calling for people to send letters to his lawyers that they can use in support of his application.

Key points to mention are that he has a solid support system waiting, with available opportunities of employment, residence, and transportation, and that he is in his late 60s with several health conditions which would put him at high risk if infected with COVID-19.

Letters should include his registered name, Alvaro Luna Hernandez, and prison number, TDCJ-CID#00255735. Parole letters should be addressed to:

But the letters themselves need to be sent to Xinachtli’s lawyers at:

Sending them to Allen Place instead of directly to the parole board will help his lawyers to use them effectively.