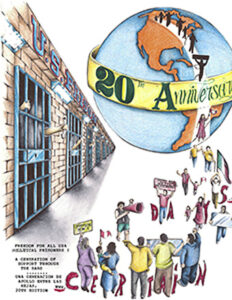 “Build them, and they will come” was the motto of the architects of the U.$. prison industrial complex and the proliferation of control unit prisons. This system of mass incarceration has historical roots. It was legalized in 1865 by the 13th Amendment to the U.$. Constitution, which replaced plantation chattel slavery with modern-day prison slavery as punishment for a criminal conviction. The abolition of plantation slavery took all forms of freedom struggle, from slave armed resistance, to underground railroads, court battles, and civil war. The proponents of modern-day prison abolition must embrace these historical lessons, to devise new strategies and tactics in our struggles for social and human emancipation from all forms of modern-day slavery, in all its intricacies. I hope this writing will encourage and inspire others to join our freedom struggles, not to ‘reform’ prisons, and the ‘criminal justice system,’ but to abolish it entirely, for the creation of a new world.

With uprisings across prisons—at Attica, Lucasville, San Quentin, Wala Wala, Texas prisons, and many others—state repression intensified, including the government’s counter-intelligence programs (also known as COINTELPRO). We saw the same after September 11, 2001. The government used extrajudicial methods then, and now, and opened ‘secret black hole prisons’ around the world, for the clandestine detention and torture of suspected ‘terrorists.’ Guantanamo Bay military prison in Cuba remains open today, despite worldwide calls to shut it down. Domestically, in the history of social liberation movements and government repression, prisons such as Leavenworth in Kansas, Marion’s control units in Illinois, and the newer supermax prison in Colorado, are contemporary examples of the militarization of Amerika’s prisons. Many of our prisoners of war, and political prisoners who come from the ranks of social liberation movements, remain in prison today after decades of wrongful imprisonment. Many of our current freedom fighters, victims of COINTELPRO, continue to languish in state and federal prisons, while others have died in inhumane conditions that lack adequate medical treatment.

These ‘prisoner struggles’ must be aligned with our community struggles, for they are one and the same. They must be brought to a broader global audience, to devise realistic strategies beyond mere ‘reforms’ of prison and the criminal justice system, that take into account historical lessons, in order to strengthen the international solidarity movement. There is a wealth of knowledge we must tap into, such as the film Unlock the Box (Reel Soldier Productions), which documents the struggles of Marion prisoners and outside activists to put an end to prolonged isolation in torturous control units and struggle against imperialism on all fronts. We cannot rely on ‘reforms’ of the system, for prisons in America are pillars of a capitalist order, using prison industries and forced prison slavery for corporate super-profits that sustain bureaucratic, parasitic bosses of its ruling class.

Our movement must concentrate on building international solidarity with renowned human rights activists to demand investigations into our cases of wrongful political imprisonment. We must push for Congressional hearings, a further examination of the Church Committee Report of 1976. We must build a global contingent of citizens, university students, and law professors to file human rights complaints against the U.$. government. It is no secret that COVID-19 is more widespread in communities of colour, due to the history of health care neglect. Health care is treated as a ‘luxury’ for the rich and not as a human right for the poor. In these special times of COVID-19, a special call must be made for the humanitarian release of our elderly freedom fighters living in unsanitary, filthy cellblocks. For more than 20 years now, Certain Days has set the example. We must build on it, now!