A tribute to Ricardo Flores Magon, created by the Xinachtli Defense Committee and the Central Texas ABC Collective 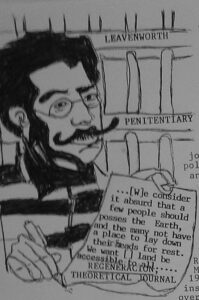 “[W]e consider it absurd that a few people should possess the Earth, and the many not have a place to lay down their heads for rest. We want land to be accessible to all…”
– Ricardo Flores Magon, Regeneracion, Theoretical Journal

Ricardo Flores Magon was born in San Antonio Eloxochitlan, Oaxaca, Mexico, in 1873, to Nahuatl parents. In 1900, he founded the revolutionary theoretical journal Regeneracion, that protested the policies of Mexican President Porfirio Diaz and the military dictatorship that oppressed the Mexican masses. His organizing and literary writings and denunciations of government and society resulted in his political imprisonment in Mexico for a number of years. Ricardo and his brother Enrique went into exile in the US to flee extreme government repression of Mexico’s working-class movements. In 1906, Ricardo founded the “Partido Liberal Mexicano” in St. Louis, Missouri.

In January 1911, the Magon brothers inspired the insurrection in Baja, California, that took over Mexicali and Tijuana into the hands of workers’ councils, with the support of the workers’ movement, the Industrial Workers of the World (IWW). Ricardo and Librado Rivera produced a manifesto entitled “To the Workers of the World” in 1918 in Los Angeles, widely circulated and distributed around the world. Addressed to “Anarchists of the World”, they called on working class unity, and control of the means of production and distribution in the hands of the workers themselves, and for the elimination of all patriarchal, oligarchical forms of ruling class domination of the poor and for the freedom of working class labor power from the shackles of wage-theft slavery, which they considered as an immoral, criminal system of exploitation and illegal expropriation.

For their political activism, Ricardo, Enrique and the other “Magonistas” were arrested, tried, convicted for “seditious conspiracy” and imprisoned at McNeil federal prison in Washington State, and later at the Leavenworth federal prison, then being used by the U.S. government to house revolutionaries, anarchists, socialists, communists and anti-fascists, at the height of the “Red Scare” fascist right-wing frenzy in the U.S., designed to suppress, destroy, and imprison resistance fighters and their social liberation movements, criminalizing all militancy and dissent.

Ricardo, inspired by the manifesto “The Conquest of Bread” written by the Russian anarchist Peter Kropotkin, produced many revolutionary theatre skits, and wrote many profound essays, poems, commentaries, and other revolutionary satirical writings denouncing Mexico’s ruling class. Ricardo also denounced the robbery of Northern Mexico through white settler colonial wars of plunder and annexation, that today comprise the states of Texas, Arizona, New Mexico, California, Colorado, and parts of Utah and Nevada, and forcing Mexico into illegal treaties, such as the 1848 Treaty of Guadalupe Hidalgo, and the Gadsden Purchase of 1853, at the point of a gun, and threats of further war to steal all of Mexico, while the U.S. Marines sat in the port of Vera Cruz, awaiting orders from the U.S. ruling class government to invade all of Mexico or retreat with its territorial land-grabs.

Repression against the Regeneracion editors grew more intense after the journal published essays related to the 1915 Revolutionary Plan of San Diego, Texas, that called for an uprising in the occupied territories stolen from Mexico, and called on all African Americans to join the armed struggle for their own liberation from the plantation slavery of the South, and for the creation of their own African Republic in the South.

A U.S. anarchist political prisoners support movement to free Ricardo, Enrique, and the other imprisoned “Magonistas” was born, led by Emma Goldman, Eugene Debs, the IWW and other working-class and labor movements, in spite of repression against the movement by the governments of Mexico and the U.S., who joined forces to destroy the working class movements in both countries. Ricardo was assassinated on November 21, 1922, in Leavenworth prison.

Today, Ricardo Flores Magon lives through his ideas and his writings, such as Tierra Y Liberta, and other of his writings published in Regeneracion that remain valid today, as adopted by Emiliano Zapata during the Mexican Revolution, the anarchist indigenous resistance movements in Mexico, and the social tremors initiated by Sub-Commandante Marcos and the Zapatista Army of National Liberation in Chiapas, and the Chicano Mexicano Movement for independence, for self-determination, and for national liberation revolution, from within the belly of the beast’s occupied territories and its concentration camps for the poor, neo-colonial plantation prisons of mass incarceration in Texas.

This November 21, 2020, we pay homage to our Comrade, our mentor, our hero, our martyr, and our Brother and Teacher, and remind the rest of the world that the Chicano Mexicano movement for National Liberation has never died, for a people, a nation, a movement will never die as long as our indigenous homeland remains in the hands of racist, war-criminal, foreign invaders, who will never lay permanent claim to the stolen lands in the U.S. Southwest, for those who occupy these lands can never be truly free, nor enjoy human happiness, and freedom of conscience and dignity, until these lands are returned to their legitimate owners, and victims of these colonial war crimes are awarded reparations for their human suffering and loss, to make them whole again, that must begin at a convened International Truth Commission and Reparations Tribunal, as our healing of these historical traumas begins…
-By Xinachtli, Chicano POW, political prisoner, now going on 19 years in consecutive solitary confinement at the James V. Allred Unit Control Unit Prison in Iowa Park, Texas, November 21 2020

*** “Intellectual property rights” are an imperialist concept we do not believe in, nor honor; this piece may be reproduced, circulated and disseminated in all social media and other sites, without the permission of Xinachtli or the Central Texas ABC group.

Note:
Having been wrongfully imprisoned since 1997 for defending himself against an armed Texas sheriff, Xinachtli is eligible for parole in 2021. More information about how to support his parole effort should be released soon, but the Xinachtli Defense Committee would encourage everyone to send letters in support of his parole, using his registered name, ALVARO LUNA HERNANDEZ, and prison number, TDCJ-CID#00255735.
IMPORTANT: DO NOT WRITE TO THE PAROLE COMMITTEE DIRECTLY. Forward letters to the legal address below.

Parole letters should be addressed to:

But the letters themselves need to be sent to Xinachtli’s lawyers at:

Sending them to Allen Place instead of directly to the parole board will help his lawyers to use them effectively.

Key points to mention are that he has a solid support system waiting, with available opportunities of employment, residence, and transportation, and that he is in his late 60s with several health conditions which would put him at high risk if infected with COVID-19.