“It is the duty of us poor people to work and to struggle to break the chains that make us slaves…” – Ricardo Flores Magon, Mexican revolutionary anarchist, assassinated by Leavenworth federal prison pigs, Nov. 21, 1922

From within the belly of U.S. fascism, I greet you in internationalist solidarity in resistance against prison slavery, global capitalism and Yankee imperialism, hoping this one finds all of you across the ocean, in the very best, as it leaves me, in spite of being under the daily, repressive boot heel of neo-nazi gestapo captivity in this KKKoncentration KKKamp, known as the “Gunatanamo of Texas prison,” but incessantly in fierce struggle against this capitalist dehumanization and mass incarceration of the poor, mostly of people of color, disproportinately represented in the U.S. prison industrial complex, all for corporate profit, having nothing to do with “public safety” nor “criminal justice!”

…I apologize for not writing any sooner, but things around here have been hectic, to put it mildly, with so many pressing issues, and work to be done, to shine the torch of resistance in bringing awareness to others of the true nature of prisons under this U.S. capitalist system, which prisons have become “big business” and an integral part of the new Jim Crow system of “legalized slavery” sanctioned by the 13th Amendment, U.S. Constitution. As Jean-Jacques Rousseau, Freanch author and philosopher, 1712-1778, once put it: Law is an invention of the strong to chain and rule the weak. These “Texas prison slavery plantations” were all built by prison slaves, on stolen lands, occupied by foreign, racist invaders, since the beginning of Yankee white settler colonialism and the “spoils” of wars of conquest grounded on mostrous war crimes and crimes against humanity, of the ethnic cleansing of indigenous tribes and nations by ruthless, vicious war criminals that have inherited this real estate from their “founding fathers”. To conceal these war crimes, the fascist right wingers like Republican Presidential candidate Donald Trump hide behind their hate mongering by invoking “political correctness”, to continue to suppress the ugly history upon which the U.S. body politic’s foundation sits. Those of us who know this hidden history and use it to bring awareness to others, are targeted by the fascist U.S. police state, as they did me, for they considered me a “threat” to their fascist empire.

They realize that it is this awakening that will fan and fuel “our” social movement, to build mass mobilization of the poor and oppressed, and to ultimately wrestle political power from the U.S. Oligarchical government and class families, and to transform that power to the poor, the oppressed, the people, who by our own blood, sweat, tears and labor power create all socio-economic wealth as wage-theft slaves of the U.S. Oligarchy. We must “break these chains that makes us slaves”, as Brother Flores Magon once put it.

I am not a “common criminal”. I am not a “gang member”. I am not a “con artist”. I am a man. I am a freedom fighter in resistance against the racist and oppressive U.S. Oligarchical system that is an illegitimate, criminal system. For many of us, it has never been any Amerikkkan dream, but an Amerikkkan nightmare, as Brother Malcolm X once said. All that “forked tongue” double-speak about America being all milk and honey and “equal justice and democracy for all”, are mere empty slogans to blind people to the true nature of this criminal system and to brainwash us all in converting us into mindless and heartless robots, and to salute and die for the U.S. Flag, and all the genocide, war crimes, land thefts, and plantation slavery system that it represents. I am sure you have heard about the NFL football protest by many players, refusing to stand for the national anthem in protest of the many racial and social injustices against people of color in the U.S., mainly racist police murders of unarmed, innocent civilians, whose only “crime” has been the color of their skin. That is what Amerikkka means to many of us, of whose “prisons” are occupied by people of color, another form of Jim Crow genocide. Please post this message on the worldwide web so that others around the world may know that there is a robust, and vibrant social movement inside the belly of the fascist beast, struggling to dismantle global capitalism and Yankee imperialism, that would include the abolition of all capitalist for-profit prisons.

All of my incoming letters, newsletters, and other news clips related to the September 9th international day of solidarity with U.S. prisoners, in commemoration of the 45th Anniversary of the NY Attica Prison Uprising, have all faced censorship by the fascist totalitarian suppression apparatus. Incoming letters, jpay emails, etcetera, have all been denied, SEE ATTACHMENT, if any incoming material contains even a “soft whisper” criticial of prison slavery, of racist, murdering police pigs, and other injustices. I am under a total news blackout and I don’t know what has happened and is happening as related to those activities. Some of my “commemorations” and other circular letters, sent out, days before Sept 9th, were allowed out and have been posted. Have you read them? See freealavaronow @ gmail.com facebook: Free Xinachtli Now ABQ.

Thank you for letting me know about struggles there. We are fighting the same common enemy, an enemy who is determined to rule the world and impose its global capitalist wage-slavery socio-economic system against the working class internationally. So, our resistance movement must also be an international resistance movement against the chief violators of human rights, and oppressor of the world’s populations – U.S. global capitalism and imperialism! La lucha continua!

Please stay in close contact. My revolutionary anarchist greetings to all in the United Kingdom! Hasta la victoria simpre! VENCEREMOS! 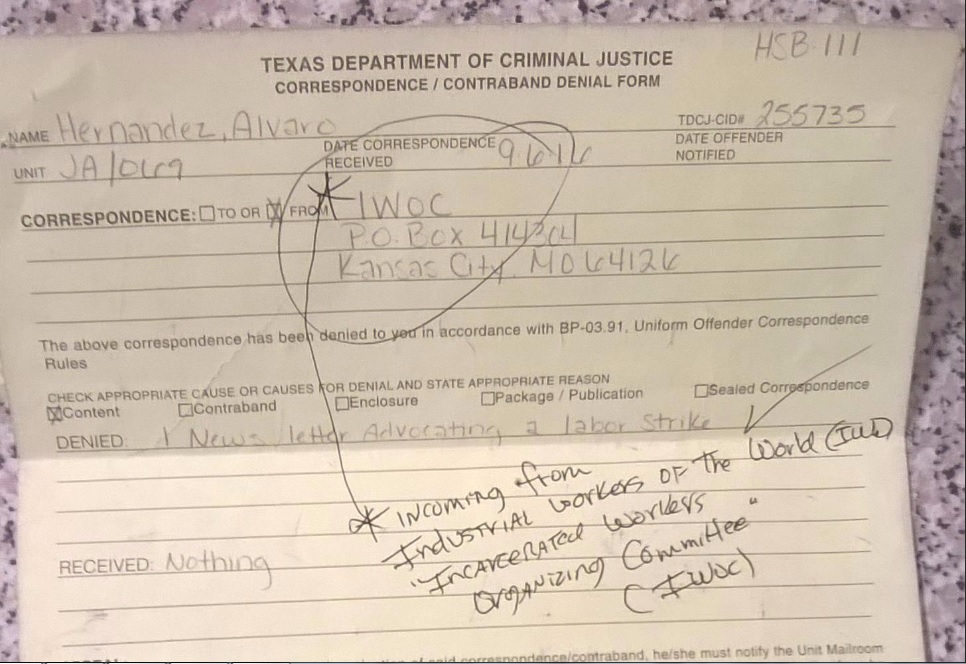